Do We Need Physical Reminders of The Holocaust? 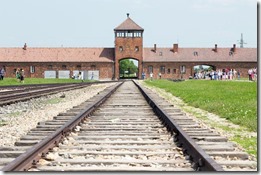 Kelsey Miller has written a well thought out article about whether we need Auschwitz to be around in order to remember what happened.

Do we? Do we need something of a physical nature to remember all that happened? Some people do. I’m sure the survivors don’t but if we don’t have a physical reminder, is it possible for those who deny the holocaust even happened to win the narrative? If the lie is told often enough, it is believed by enough people for it to become the truth.

In September 2001 I went to the Holocaust Museum in Washington DC. It was a chance to pay respects to my dear friend Mrs Elephan (my next door neighbour when I was a child) and who was an Auschwitz survivor. I was no longer ten years old but thirty six and knew of the horrors of the Holocaust. I was not prepared to meet it face to face. Everyone should go to a Holocaust Museum to remind yourself of what hatred can do and
if left unchecked (as it was in Nazi Germany), the results are devastating.

As someone who has touched on War and the Final Solution in my first novel “In the Blood of the Greeks” – I was intrigued (If you can call it that) when I saw a box car – opened ended. I was intrigued because one of the scenes I wrote was of the village priest being sent to sit in one with the Jews. I have researched the holocaust ever since I was given the book “I am Rosemarie” Marietta D. Moskin. It was given to me by Mrs Elephan and it had a profound effect on me. That scene in the box car, I thought, was well researched.

I stepped into that boxcar, stood in the middle of the boxcar and closed my eyes and imagined what it might have been like. I freaked myself out and almost gave myself a panic attack because it seemed so real. That night I went back to where I was staying and rewrote that scene. That was only after a few seconds. I cannot begin to imagine what it must have been like for those poor unfortunate souls who were imprisoned for days in one and their final destination was Auschwitz.

Do we need Auschwitz? I believe we do.

Do you? You decide after you read the following article – “Saving Auschwitz: Is It Really Possible”