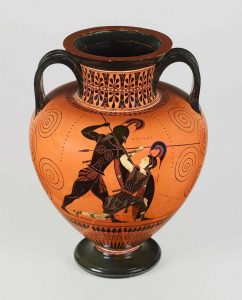 National Museum director Mathew Trinca said he was delighted Ancient Greeks was among the exhibitions on offer in the Museum’s 20th birthday year.

‘I know audiences will be mesmerised by the stories of competition in the ancient Greek world and by the beautiful depictions of athletes, the ceramics, sculptures, armour and jewellery featured in the show,’ Dr Trinca said.

Read more about it