Here's an old interview I gave for MediaBlvd Magazine from May 2006.

INTERVIEW FROM MEDIABLVD MAGAZINE
22 May 2006 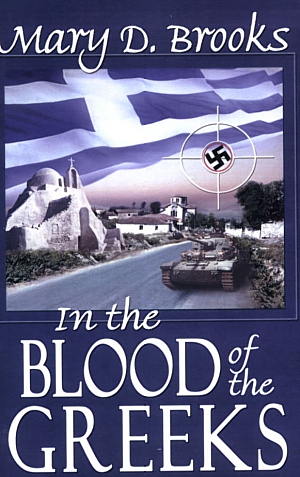 Set against the historical backdrop of a German occupied village in World War II Greece, Mary D. Brooks’ novel, In the Blood of the Greeks, is a love story. It is the tale of two women, seemingly from very different worlds, finding each other and themselves as everything is falling apart around them.

Sixteen-year-old Zoe Lambros is from the village of Larissa, and has seen most of her family die at the hands of the Germans. Eva Muller is the daughter of the major in command of the occupying force. In the first chapter of the book, Major Muller shoots Zoe’s mother in front of her. As Zoe is holding her dying mother in her arms, she thinks she hears Eva laughing; this causes Zoe to despise Eva, and even to plot to kill her. Later, Zoe takes a job as Eva’s maid and plans her revenge, but things are not at all as they seem, and the two women find unexpected love in extraordinary circumstances. The book is the first in the series called Intertwined Souls.

Brooks, an extraordinarily likable and outgoing person, is a woman of many talents. In her spare time, she is the webmaster of the largest and arguably best-known fan web site (ausxip.com) for the television show, Xena- Warrior Princess, and its star, Lucy Lawless. The website is a shrine to the entire Xenaverse, and to all of the various other projects that Lawless has been involved in, including her role as a Cylon agent on Battlestar Galactica.

Though Brooks has written several books about the lesbian couple, Eva and Zoe, she is heterosexual. She laughs at the question as to how a straight woman can possibly write a realistic portrayal of a gay couple and their relationship. “I don't think we set out to choose the characters but the characters choose us,” she says. “I don't really know why. I can't tell you where those characters came from but they just did, and they just happened to be lesbians. The fact that I'm a straight woman shouldn't even be a factor. Storytellers are there to tell the story. The story and not the storyteller is the important part.”

Brooks is of Greek ancestry and has long had an interest in the stories of the unsung heroes who suffered through the war. “I have a Greek background and that time period fascinated me,” she says. “I've had a special place in my heart for people who had gone through the horrors of the war. When I was 16 years old I read a book called Rosemarie, which was about a fiction account of a teenager growing up in that time-period, and also going through the concentration camp. Followed that up with the real story “Anne Frank's Diary”, which horrified me. I realized that many people suffered but we didn't know their names. Also there were many that tried to save people from the Nazis; the priests, the nuns, ordinary people who did extraordinary things.”

“There were heroes whose deeds went unnoticed by history but they shaped the lives of many people. So I wanted to write a story that brought those elements together – the time frame of the war and beyond, and to bring those unsung heroes to the surface. The more I researched the more horror stories I read – and I figured if one of those characters have gone through the horrors then it would be an interesting storyline, to see how they would react, how they would survive mentally and physically when faced with other obstacles. Would they just shut off emotionally or would they want to move forward – try to live their lives the best way they can? Would they regret the hand that life dealt? Greece's part in the war wasn't well known so I set it there, researched it, and brought it into the story.”

The horrors of what both women had gone through, which are touched on in the first novel will be explored in the following novels in the series. Both women are survivors in their own way.

Locations and actual events in the book were researched quite extensively. Brooks says “Some of the events depicted in the novel “In the Blood of the Greeks” were very real; such as the treatment of the Greeks by the Germans, the repercussions of the Greek Resistance against their occupiers, the blowing up of the bridge, etc. Athanasios Klaras was head of the communist resistance group that was around Larissa at the time. I just took liberties with the characters like Klaras to weave them into Eva and Zoe’s lives.”

Eva and Zoe first appeared in 2001 and were published that year by another publishing company. Since then Brooks has worked on more of the storyline and has a new publisher, Cavalier Press. The next book that will be released this month is called “Where Shadows Linger”.

The year is 1948. After fleeing Nazi-occupied Greece, Eva Muller and Zoe Lambros are still very much in love, wanting nothing more than to fulfill their dreams and hopes for the future. Emigrating to Sydney, Australia, the two women find themselves making new friends and forging a new life together. However, it is not long before their happiness is marred by prejudice, and the machinations of old enemies that plunge them into mortal danger. Will their unique connection be destroyed? Will they lose their new-found friends? Or will Eva and Zoe's love prove strong enough to overcome the shadows of the past that continue to linger in their lives?

It takes Brooks between three to six months to write a novel. “I try and write it the same way life happens – it evolves. Sometimes an idea would morph into something else that I hadn't thought of and I go with the flow. Sometimes the characters take me places I hadn't thought about. It takes on a life of its own,” she adds.

Brooks has received encouraging feedback about her novels, and her fans are both male and female. “I had feedback from one woman who told me that her grandmother suffered during the war and this gave the granddaughter an insight. The story may not have been the same but the impact was. I have had people tell me that they loved the fact that Eva never gave up. The audience is mixed – I've had men write to me to tell me they like the stories as well as women, but I suspect there are more women than men.” Unfortunately, she will not be doing a book tour for Where Shadows Linger, but hopes to do one for the third book in the series.

Brooks plans to finish the Intertwined Souls series, and then has other characters in mind that she may explore. “At the moment Eva and Zoe are keeping my head busy but I do have other characters that I would like to explore, but their turn will come when I'm done with the story of Eva and Zoe. I have plans on releasing three more books – Where Shadows Linger is the next one, and another two that will round out the story of the women, and will come full circle.”

You can check out Mary D. Brook's Official website at http://www.nextchapter.net/

Interview originally published at
http://www.mediablvd.com/magazine/Magazine-Home/MBMag_20060420159.html (now via the Internet Archive)