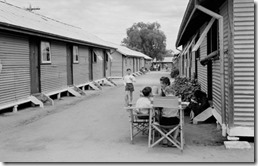 In the second novel “Where Shadows Linger” opens up as Eva and Zoe have arrived in Australia and are living in a migrant hostel. The following article with photos is a good way to showcase what it was like.

The National Archives in Canberra has launched a new photographic exhibition giving an insight into life in Australia's migrant hostels.

The exhibition was drawn from a collection of 20,000 photos handed to the archives by the Department of Immigration.

“We found the hostels were the most evocative sets of photographs so lots of people had experiences they could relate to … they brought back lots of memories,” she said.

Migrant hostels were set up around Australia after World War II to support the Commonwealth Government's push to boost the population.

Hundreds of thousands of new arrivals to the country stayed in them – in some cases briefly, in others for months or years.