Nazis Couldn’t Sleep Because of the Searchlights…

Doesn’t this article just break your heart? I shed so many tears I filled a bucket. The poor Nazis couldn’t get to sleep because there was too much light. Isn’t that shocking? It’s a human right to sleep in the dark without intrusive lights interrupting their sleep.

Someone should have given me a gun and I would have sent them to sleep very easily. The searchlights would not have bothered them although the fires of hell are far more brutal and difficult to get to sleep than a little searchlight. The following Nazi sob story was in the Guardian Newspaper 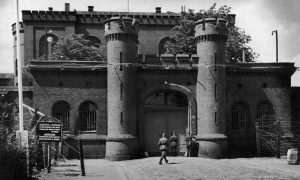 Nazi war criminals held in the infamous Spandau prison after the second world were treated “exceedingly harshly”, and could not sleep because of constant security searchlights, according to Konrad Adenauer, West Germany’s first postwar chancellor, in a letter released by the National Archives.

Inmates at the Berlin jail – the running of which was shared on monthly rotation between the Allied powers of UK, US, France and Soviet Union – were also prohibited from conversing or reading, Adenauer complained to Allied officials in the letter, dated 21 June 1950.

Food, which “had always been bad during the Russian months”, had become “very bad and deficient” again, he said.

Adenauer’s intervention on behalf of the prisoners, which at that time included Albert Speer and Rudolf Hess, is among a cache of documents from the Allied administration of Berlin that have been declassified.

The West German chancellor also complained that clergymen were not permitted to visit inmates. “The pope some time ago had his blessings transmitted to one of the prisoners,” he wrote. “The prisoner was never informed of this but heard it only when his daughter visited him.

“For humanitarian reasons,” Adenauer added, “I feel moved to ask [that] the governments [the Allied occupying powers] to cause conditions in the military prison at Spandau to be investigated and to take steps to ensure that penal practice be adapted to the principles prevailing in civilised countries.”

British, French and US authorities who met the following day to assess the complaints partially blamed the Soviets for the conditions. The three western powers agreed to reduce the frequency with which the lights were turned on at night.

In July 1950, the secretariat of the Allied High Commission for Germany wrote back to Adenauer. “Contrary to the information which appears to have been given to you, it is neither prohibited for prisoners … to talk or read,” he said. “Their food is quite adequate during the months of management by the western powers and even during the Soviet month the regular amount of calories is provided.”

However, the chancellor was informed, lampshades would in future be provided for lights in the men’s cells and the frequency of night security searches would be “reduced to a minimum”.

The post Nazis Couldn’t Sleep Because of the Searchlights… appeared first on Zoe Lambros Journal.