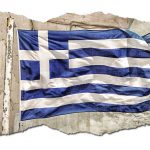 I was getting too morose as the day dragged on, and my ankle had swollen up after my rampage through the streets to get to Eva. Despite my ankle, I just had to get up and walk around. I’ve never been one to just sit down for long periods of time. Unless, of course, I was waiting to ambush German soldiers. I’m not going to be doing that now. Eva was asleep, the nurses were doing their afternoon rounds, and the Australian soldier that I wanted to talk to was fast asleep too. As I walked through the ward to get out, my stomach rumbled.

I walked out into semi-darkness. There was a sliver of light on the horizon peeking through the clouds. I would have admired the view if I wasn’t hungry.

I looked around when I heard Thanasi’s voice and found him leaning on the crates. I almost didn’t recognize him. He had shaved off his beard right after I had seen him earlier. “She was when I came out here. What happened to your face? Did a razor attack you?”

Thanasi laughed. “I haven’t shaved in four years; I thought I might see what was under there.” He put his arm around me and I wondered what he was doing. I sure hope he wasn’t about to tell me how Anthony was sweet on me or something as silly.

“I’ve been meaning to talk to you about something. I made a promise to Father Haralambos about taking care of you, and I’m determined to keep it. I promised him that you and Eva would leave Greece.”