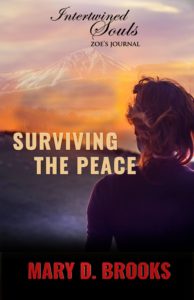 I'm quite pleased to announce that Zoe's Journal: Surviving The Peace is the next book to be published by AUSXIP Publishing. Date to be announced.

This is Zoe's Journal from the moment Larissa was liberated by the British in 1944 to the time Eva, Zoe and Henry left Larissa and headed to Egypt. It was a difficult and dangerous journey. The war on the mainland was over but the Islands were still occupied by the Germans until 1945.

Surviving the Peace would be the first book I've written in first person – Zoe's voice – and it's a departure from my normal writing style. Do you all like the cover?

So stayed tuned for more news about this new series. I'm hoping to bridge the gaps. between 1944 to 1947.