Announcement: In The Blood Of The Greeks Book 1 Print & Ebook 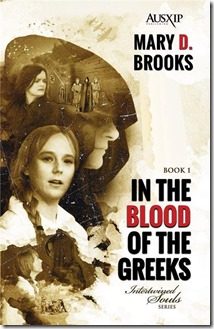 I’m very pleased to announce that the entire Intertwined Souls Series will be published by AUSXIP Publishing. The first book “In The Blood of the Greeks” will be available in print and ebook.

Check out the most amazing cover, designed by Jazzy Trafficano who is the Art Director for AUSXIP Publishing.

IN THE BLOOD OF THE GREEKS
Intertwined Souls Series – Book 1

In the Blood of the Greeks is set against the backdrop of World War II. The novel begins in a most troublesome period of human history, where subjugated by the might of Nazi Germany, two women meet under extraordinary circumstances. This is the story of Eva Muller, the daughter of a German Major, in command of the occupying force in Larissa, Greece in 1942. Through the intervention of the village priest she meets Zoe Lambros, a young Greek woman with vengeance in her heart and a faith in God that has been shattered by the death of her family.

Eva and Zoe must work together and overcome their hatred for each other while facing down their own demons. Hatred turns to friendship as they find common ground while helping Jews escape from the Nazis.