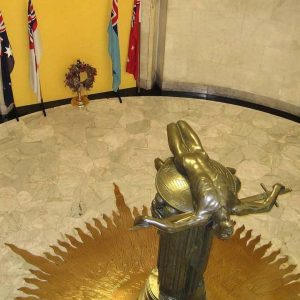 The following is from the ANZAC Memorial here in Sydney. It’s a place I have visited often. It’s an emotional place and this statue reminds me of the sacrifice that was rendered. Duty. Honor. Sacrifice. It’s not the glory of war because there is no glory in war but in the sacrifice of those that served and died.

The details below are from the Anzac Memorial Page describing why this statue was created and why it’s in the Memorial:

The sculpture ‘Sacrifice’ encapsulates the message at the heart of the Anzac Memorial. Designed by sculptor George Rayner Hoff the sculpture is based on the story of the Spartan warrior from ancient Greece. Spartan men were raised as warriors from boyhood and, when marching to war, were told to come home with their shield or on it – a warning to be victorious or die in the attempt. Rayner Hoff has created an image that depicts the weight of the dead young warrior carried on his shield by his mother, sister and wife nursing infant child. The sculpture Sacrifice uses the analogy of the Spartan warrior being returned to his loved ones dead on his shield to evoke the emotion experienced by the families of the young men who died in the Great War 1914-18.

In the BOOK OF THE ANZAC MEMORIAL published in 1934. The sculpture Sacrifice is described “with great dramatic power it portrays the recumbent form of an Anzac whose soul has passed to the Great Beyond, and whose body, borne aloft upon a shield by his best loved – mother, sister, wife and child – is laid there as a symbol of that spirit which inspired him in life, the spirit of Courage, Endurance and Sacrifice. There is no pomp, no vain glory, no glamour in this group; rather is there stark tragedy, grim reality and bitter truth. But it is the truth which tells not only of the brutality of war and of the suffering it engenders, but of the noblest of all human qualities – self-sacrifice for duty.”