Athena’s Bluff – A Place of Refuge 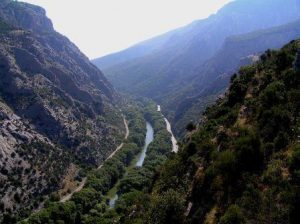 Today I want to write about a place near my home called Tempi Valley. It’s one of my favourite places in the world because it’s so serene (when it’s not being bombed by the Germans or Italians or Bulgarians or the Turks…or anyone else who feels like invading Greece). It’s also the place that I fell madly in love with Eva Muller. First, it was like, then heavy like and then I fell off a cliff and it’s never been the same since.  Athena’s Bluff holds a very special place in my heart. Long before I fell off the cliff for Eva, it became to be a place of refuge for me.

After my mother was murdered in 1942 I didn’t want to go back to the farm in Farsala. There were too many memories and I just couldn’t bring myself to going home. It wasn’t home any more. I couldn’t bear the thought of walking through the front door and not hearing my mother’s voice or smelling the baked bread. Couldn’t imagine not hearing her laugh – even when the war started and we lost my brothers and then my father, she would find something to laugh about. Her name was Helena and she was an artist. A very gifted artist with long, curly red hair and the most beautiful green eyes. My father used to say that mama’s eyes reminded him of a forest. I’m going assume he meant the green and not the bark of the trees. Whenever papa would say that about mama’s eyes I would laugh and tell him the trees were brown and not green. Yes I was a mischievous child.  I inherited my mother’s red hair. green eyes, her artistic talent, cooking and sewing skills and the unique ability to remember things. My mama used to call it a photographic memory. I didn’t inherit her height or her patience.

I’m going to stop talking about my mama because I get quite emotional when I think about her. Where was I? Oh yes Tempi Valley. Farsala is about thirty minutes from the valley. It was just far enough that when the Germans came and were fighting in the gorge, papa sent mama and me to Athena’s Bluff which was high above a mountain top overlooking the valley. My second brother Thieri owned the land up there and he built a cabin. He was going to propose to his girl but the Italians invaded and that never happened. His girl died a year after the Germans arrived.  Some things are just not meant to be.

I inherited the land and the cabin up on Athena’s Bluff. I inherited all the property that belonged to my family since I was the only one left. Dirt and a lot of memories.

On a good day I could walk there in about thirty minutes. Evy used to walk over there in about an hour. She was slow but she enjoyed the walk because she could be with her own thoughts and the quiet was soothing. How that was soothing to her back going up a mountain is a mystery to me, even now, but then Eva always does things that I don’t understand.

On Athena’s Bluff is where I realise, now, that I was falling in ‘heavy like’ with Eva. High above on a mountain in the middle of a war I was falling in love. God or the fates or someone was laughing at me. I used to make fun at the girls my age that were flirting with the Italian soldiers in Larissa. Some were even getting friendly with the Germans. Imagine that. I used to call them collaborators and traitors. How could you fall in love with a German? That was just crazy.

Mama used to say not to laugh at the crazy things people do because one day you might find yourself doing exactly the same thing. Yes, well, my mama was a smart woman and I’m not so smart because I didn’t listen to her. I lost my heart to a German. Never laugh at what other people do, Zoe.

Athena’s Bluff and Tempi Valley is where I lost my heart. I’m not in a hurry to go find it.