New Novel: Mabel of the ANZACS 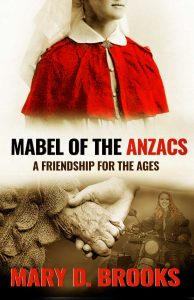 I’m currently writing a new story called Mabel of the ANZACS* – story about World War I heroism through service and sacrifice.

MABEL OF THE ANZACS is a standalone novel set in the Eva and Zoe timeframe. The events of this novel take place between Book 2 (Where Shadows Linger) and Book 3 (Hidden Truths). It’s not necessary to read the novels to dive into this one.