November 9 – That date has a huge significance in Germany and to the world. 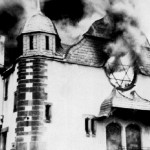 November 9, 1938 was when Kristallnacht (The Night of Broken Glass) happened which escalated and led to the Jewish holocaust but it was also the date that changed Eva's life (in the novel “In the Blood of the Greeks“).

Kristallnacht, also referred to as the Night of Broken Glass, or Reichskristallnacht  was a pogrom against Jews throughout Nazi Germany and Austria on 9–10 November 1938, carried out by SA paramilitary forces …read more

In my first novel, Eva's world was shattered when her mother was murdered, mistaken for a Jewess, and her father found out Eva was a lesbian- the two events combined to send Eva's world coming crashing down on her in the most horrific way.

November 9, 1989. That day also saw a huge significance in Germany – it's the historic day that the despised Berlin Wall was breeched by 20,000 people without violence, without losing their lives, without a single shot fired in anger. It was the day that a East German officer made a decision that brought the end of a divided city.

This is from today's Sydney Morning Herald:

Berlin: The East German lieutenant colonel who gave the fateful order to throw open the Berlin Wall 25 years ago said he wept in silence a few moments later as hordes of euphoric East Germans swept past him into West Berlin to get their first taste of freedom. Harald Jaeger said he spent hours before his history-changing decision trying in vain to get guidance from superiors on what to do about the 20,000 protesters at his border crossing who were clamouring to get out. When he had had enough of being laughed at, ridiculed and told by commanders to sort it out for himself, Jaeger ordered the 46 armed guards under his command to throw open the barrier.

He then stepped back and cried – tears of relief that the standoff had ended without violence, tears of frustration that his superiors had left him in the lurch and tears of despair from a man who had so long believed in the communist ideal.

He had joined the border guard unit in 1961. Over 28 years, he saw the barrier grow from an infancy of coiled barbed wire to a brick wall and then to maturity as a towering 160-kilometre white concrete screen that encircled West Berlin, cutting across streets, between families and through graveyards.

“My world was collapsing and I felt like I was left alone by my party and my military commanders,” said Jaeger, now 71, remembering the night. “I was on the one hand hugely disappointed but also relieved that it ended peacefully. There could have been a different outcome.”