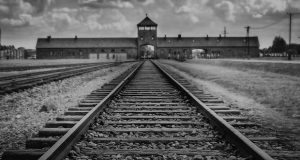 1.1 MILLION were murdered in Auschwitz-Birkenau alone. January 27 was designated by the UN as International Holocaust Remembrance Day.

My friend Steven L Sears posted this on his Facebook page.  Please read “This Room At Dachau”.