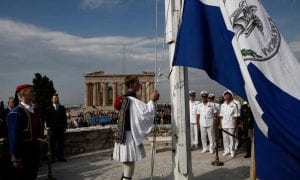 Greece says it will pursue its quest for second world war damages and repayment of a loan forcibly extracted during Nazi occupation with renewed zest, despite Germany openly rejecting the claims.

Less than two weeks after German president, Frank-Walter Steinmeier, used a state visit to apologise for atrocities committed by his forefathers, Athens vowed to relaunch the campaign while hailing the onset of a new era in bilateral ties.

“This is an issue that psychologically still rankles, and as a government we are absolutely determined to raise it,” said Costas Douzinas, who heads the Greek parliament’s defence and foreign relations committee.

“Obviously Greece couldn’t do that when it was in a [bailout] programme receiving loans from the EU and Berlin. It would have been totally contradictory.”

The leftist-led government is expected to press ahead with the claims after MPs debate what has been described as the first all-inclusive parliamentary inquiry into the damage wrought under Nazi occupation.

The report, compiled by a cross-party committee over several years, estimates that compensation of €288bn (£256bn) remains outstanding for the destruction Greece sustained between 1941 and 1944, the years the country was subject to Third Reich rule. It also calculates that a further €11bn is owed for a 476m Reichsmark loan Hitler’s forces seized from the Greek central bank in 1943.

Historians argue that by triggering an economic and currency collapse, the interest-free loan – which was used to finance the regime’s Africa campaign – played a central role in impoverishing large sectors of the population overnight.

“What we now have is a complete reading of the situation with a report that looks at the total damage inflicted on the country and its people during Nazi occupation,” said Douzinas, who is also a professor of law at London University. “In the past there were appraisals of the destruction wrought in individual incidents but never on this scale.”

Officials have scoured more than 400,000 pages of records obtained from US national archives chronicling the atrocities, and other records secured from Russia. Axis forces, as elsewhere in Europe, had been methodical in dispatching reports that listed massacres, the destruction of homes and shooting of victims.

Greeks put up heroic resistance to their German occupiers, but the price was heavy. Tens of thousands were killed in reprisals for a guerrilla campaign against the Wehrmacht, and at least 300,000 died of famine. About 40,000 people are thought to have starved to death in the first year of occupation alone, and Greece’s Jewish community was almost entirely wiped out.

“Germany has never properly assumed its historical responsibility for the wholesale destruction of the country,” said Stelios Koulouglou, who represents Greece’s governing Syriza party in the European parliament. “It was a catastrophe that was so complete it played a major part in delaying our country’s development as a modern European state.”

The spectre of the emotive issue being reopened surfaced as Athens marked the 74th anniversary of liberation from Nazi rule earlier this month.

The German government strenuously rejects charges that it owes anything to Greece, or Poland which also suffered greatly, for the wartime horrors. It says the chapter was closed in 1960 when it paid Athens 115m deutschmarks, roughly equivalent to £205m today.