Liberation of Auschwitz 70 Years On: Interview with A Survivor 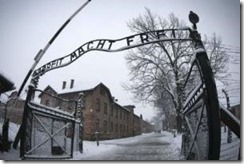 I was listening to an interview this morning on Radio 2GB in Sydney with an Auschwitz survivor called Olga Horak on the 70th anniversary of the liberation of the camp. This is the podcast of that interview. Very interesting.

This is a very moving interview.