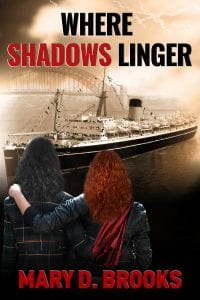 It was time for a refresh! I designed a new cover for my award winning second novel “Where Shadows Linger”.

Eva Muller and Zoe Lambros flee to Australia seeking refuge from World War II ravaged Greece. They struggle in an intolerant society whilst dealing with their haunted war-time memories and hiding their love. With the horrors of the war behind them, Eva and Zoe forge a new life together. The war is over but the shadows from their past emerge to shatter their peace and endanger their lives. They are about to find out the hard way that moving thousands of miles away does not protect them from those that wish them harm.

Reviewed by Rabia Tanveer for Readers’ FavoriteWhere Shadows Linger by Mary D. Brooks is the next installment in the Intertwined Souls series. The story of Eva and Zoe continues as the two lovers and friends travel all the way to Australia, the land of milk and honey. The two of them are looking for a fresh start and to forget about their pasts. They want to begin a new life together that helps them nurture their hopes and dreams.

While Zoe is finally able to live her dreams, Eva is still haunted by her past. But she gives her full support to Zoe so that she can nourish her artistic ability. With new and old friends, past enemies, and a society filled with prejudice, can Eva and Zoe live their lives the way they want to? Or will their love and passion will be consumed by the cruel standards of society?

When I read the first part in the Intertwined Souls series by Mary D. Brooks, I literally begged Brooks for a sequel. I have to tell you the truth, I had huge expectations for this novel and you have no idea how happy I am after reading it. I just love Zoe and Eva. They are such strong characters. In the previous novel, their relationship was just turning from friendship to love, and now they are wholly in love. They are true companions and I love that. They are everything that you wish for in a partner. Their struggles were real and relatable and so were they. I officially adore this series. Another stellar novel that blows your mind. Loved it, enjoyed it!

Reviewed by Danie on Amazon USThis is the second in Brooks’ Intertwined Souls series. The two main characters, Zoe and Eva, are still in this book, but it’s now 1947 and they’ve made it to the Land of Milk and Honey, Australia. As with books set in Massachusetts or Maine, USA, I’m also a sucker for books set in Australia or New Zealand, so I was very excited to read it for that reason as well.

It’s the story of Zoe and Eva getting settled in, finding what they want to do with the rest of their lives when before they didn’t think they had a future, and it’s about them living those lives as best they can in a hard environment (for Greeks, Germans, and Lesbians).

The plot was awesome, with twists, turns, and all sorts of surprises, but it was just the plot. My favorite part of the book were the characters. We got to meet some new ones (like Earl and Elena, I loved their stories, and David, I’m interested to know more about him maybe), and see some familiar faces, like Henry (I literally yelped, saying ‘yay’, when I saw his name), and we also get to see some surprising characters return (won’t spoil it) that I definitely didn’t expect to see.

In a lot of ways I think I liked this book even a little more than the first one. I’m unsure exactly why, but in some ways it resonated just a bit more than In the Blood of the Greeks.

I think what I took out of this novel the most is that Brooks is a good writer (I don’t give five stars easily, all books start at a three for me, if I think it turns out to be amazing then it gets a four, and if it blows my socks off, a five).

I say she’s a good writer for one specific reason regarding this book at least. I kept reading and never put the book down. This was not a short book, and yet I read it through with no interruption. I’ve read many long books in my time, and even when they’re good like Game of Thrones, or Wizard’s First Rule, I still put them down because it’s hard to take in that much fiction and not totally fry your brain. So I’ll read a graphic novel/comic book in between parts or chapters, or a bit of a prose non-fiction book or something. I will say that I considered taking a break with this book too, but, there was some sort of underlying tension or suspense in it that just made it so that I couldn’t put it down. I had to know what was next (and what was next was almost always awesome).

Reviewed by Blaire B on Amazon USWhere Shadows Linger picks up where In the Blood of Greeks leaves off. Set in post WWII, we follow the girls as they make their journey across the seas to a new home and what they hope will be a better future. Eva and Zoe are trying to find a way to pick up the pieces of their past and put them back together for their future. Eva and Zoe must find a way to build a new life in a very unfamiliar place. And along the way they encounter both new and old friends. As well as confronting an enemy they thought long since gone.

In pure Mary D. fashion, she will have you doubled over with laughter one minute and in absolute tears the next. You will find yourself completely immersed in the story that is Eva and Zoe. The detail Mary D. puts in her books will leave absolutely speechless. You will find it abundantly difficult to keep yourself from falling in love with these characters.

What I find most appealing about this book and this series is that Mary D. confronts real life issues that we all face today. She is not afraid to bring to light some of the most difficult topics you could ever come across. She does it in a way that leaves you breathless and makes you sit back and think.

What I love most about this edition, it includes some never before seen details about our favorite girls. She gives us, the readers, an more in depth look at Eva and Zoe’s most private moments. As well as giving us more detail than previously offered.

Reviewed by TFL Reader on Amazon USI have been following the story of this timeless romance between Eva and Zoe for several years now. One of my favorite things about this series is that it combines historical fiction, lesbian fiction and several other genres to make an intriguing series worthy of keeping me up nights. I also love that author Mary D. Brooks has made improvements on her series, with several of these books now in their 3rd edition.

“Where the Shadows Linger” is the 2nd book in the “Intertwined Souls” series and takes place in the aftermath of World War II, which is where the two met on opposite sides of the conflict. They have fallen in love and are looking to make a life together. As such, they have decided to make a move to Australia together. While moving can be a great way to make a new start, we also often take our problems with us as the two quickly find out. They do make new friends but Eva continues to struggle with a difficult past. Also living as a lesbian couple in that day and age wasn’t without its difficulties and prejudices, which they come into contact with as well.

I loved this second installment and continuing the journey with these two. The historical elements seemed very accurate to me and I enjoy learning about history while being entertained by an epic tale at the same time. The relationship between Eva and Zoe illustrates some real issues, marred with strong emotion that hit home for me and I am anxious to keep reading these amazing books to find out what happens next. Great read.

Reviewed by Sherly on Amazon US

This isn’t the most customer friendly book out there. What I mean to say is that it doesn’t offer thrills in a manner you would expect considering the genre. You have to keenly observe the writing to pick up many nuances like changes in the mood of the story. You have to have a fresh perspective while reading Where Shadows Linger. Like the old adage says, things are not always what they seem. This book is certainly a surprise pack for readers who are willing to go the extra mile in understanding and uncovering the characters of a novel. The author provides the softer and optimistic side of life with a love story that you will want to work at any cost. And then she also shows the dark side of life and how some people just don’t have it in them to let others live life freely. There are some genuine moments of tenderness and honesty between the two female leads.

Their relationship has been nicely captured and feels real-like. I congratulate the author for making me think through this book about relationships and commitment. Matters of the human heart are never simple and easy and it needed a visceral voice like Mary’s to carve a wonderful story out of it.

Reviewed by Michelle Brown | Amazon USI don’t want to talk too much about the story and risk giving away a spoiler. I will say this though. This book is about journeys. Some journeys are literal in nature and ones that take you from one home to another. In other kind of journeys you meet people who end up changing your lives, and sometimes you even meet a different version of you. Someone whom you didn’t know existed before. Here two women, two lovers take an epic journey from Greece to Australia after WW2 has ended. In changing circumstances that are often beyond their control they learn a lot, about the world and themselves.

There are not a lot of twists and turns in this book and yet you will keep turning the pages late into night. The story stays true to the theme of timeless romance and each chapter is a thrill to read. I am glad I read this. It kept me anxious and on edge as I waited for Eva and Zoe to find the peace and tranquility that they so richly deserve.