The years are quickly slipping away and the stories of courage, bravery and the best of humanity will be part of history when the heroes of World War II pass away. The Times of Israel features one such hero, 92 year old Melpomeni Dina from Thessaloniki who saved so many Jewish lives. I'm just finishing writing Enemy at the Gate and it's a reminder that a real life Zoe Lambros risked her life to save others. Thank you Melpomeni Dina and your family for finding the courage to do what you did. Heroes walk among us who truly deserve to be called Heroes.

The last reunion? In Jerusalem, Greek WWII rescuer, 92, meets the Jews she saved
‘Now I can die quietly,’ says Melpomeni Dina, as she unites with the dozens of descendants of the Mordechai family, in what may be the last-ever meeting of its kind

AP — One by one, the 40 descendants of a group of Israeli siblings leaned down and hugged the elderly Greek woman to whom they owe their very existence, as she sat in her wheelchair and wiped away tears streaking down her wrinkled face.

Clutching the hands of those she hid, fed and protected as a teenager more than 75 years ago, 92-year-old Melpomeni Dina said she could now “die quietly.”
Sunday’s emotional encounter in Jerusalem was the first time Dina had met the offspring of the Mordechai family she helped save during the Holocaust. Once a regular ritual at Israel’s Yad Vashem Holocaust memorial, such gatherings are rapidly dwindling due to the advanced ages of both survivors and rescuers and may not happen again. The soon-to-be-extinct reunion is the latest reminder for Holocaust commemorators preparing for a post-survivor world. 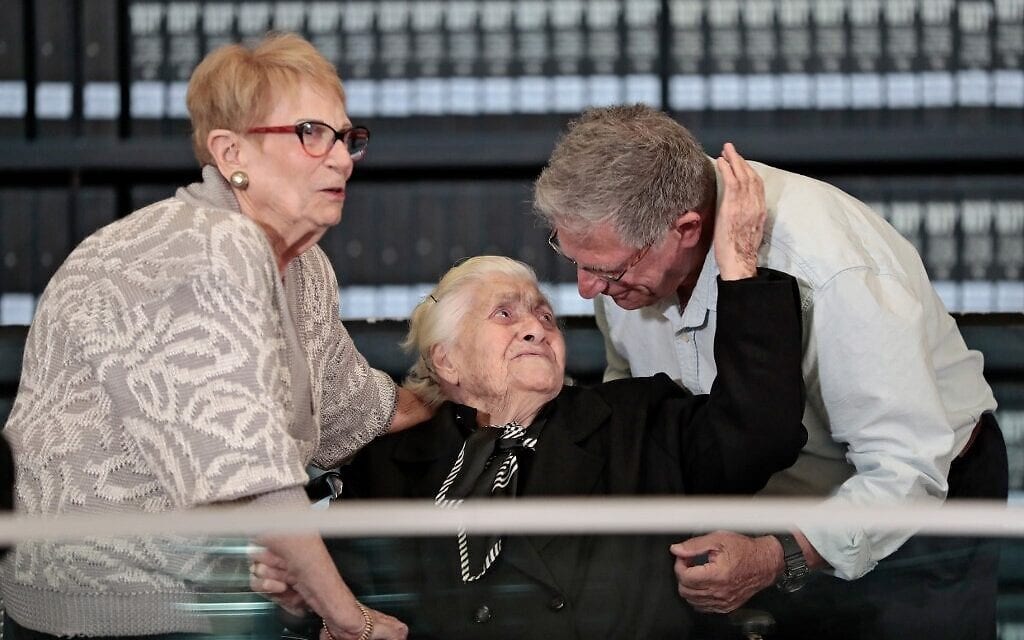 Greek World War II rescuer Melpomeni Dina (C) reacts as she is reunited with holocaust survivors Yossi Mor (R) and his sister Sarah Yanai, whom she helped escape in 1943, at the Hall of Names at the Yad Vashem Holocaust Memorial museum in Jerusalem on November 3, 2019. (Photo by Emmanuel DUNAND / AFP)

“The risk they took upon themselves to take in an entire family, knowing that it put them and everyone around them in danger,” said Sarah Yanai, today 86, who was the oldest of the five siblings Dina and others sheltered. “Look at all these around us. We are now a very large and happy family and it is all thanks to them saving us.”

About six million European Jews were killed by German Nazis and their collaborators during World War II. More than 27,000 people, including some 355 from Greece, have been recognized as “Righteous Among the Nations,” Israel’s highest honor to those non-Jews who risked their lives to save Jews during the Holocaust. 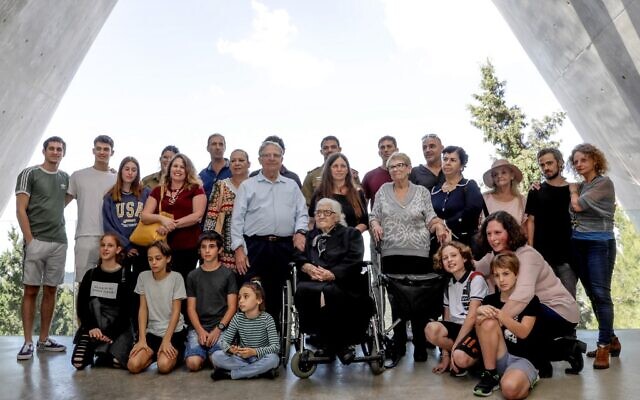 Greek World War II rescuer Melpomeni Dina (C) poses for a group photo with holocaust survivors Yossi Mor (C-L) and his sister Sarah Yanai (C-R), whom she helped escape in 1943, along with their descendants at the Hall of Names at the Yad Vashem Holocaust Memorial museum in Jerusalem on November 3, 2019. (Photo by Emmanuel DUNAND / AFP)

The most famous cases are Oskar Schindler, whose efforts to save more than 1,000 Jews were documented in Steven Spielberg’s 1993 film “Schindler’s List,” and Raoul Wallenberg, a Swedish diplomat who is credited for having saved at least 20,000 Jews before mysteriously disappearing.

The names of those honored for refusing to be indifferent to the genocide are engraved along an avenue of trees at the Jerusalem memorial. Only a few hundred are believed to still be alive.

“This is probably going to be our last reunion, because of age and frailty,” said Stanlee Stahl, the executive vice president of the Jewish Foundation for the Righteous, which sponsored the event and which provides $1 million a year in monthly stipends to those recognized.

She said her organization has been doing such reunions every year since 1992, but this one was likely the last of its kind and therefore particularly emotional. Similar reunions sponsored by Yad Vashem of long-lost siblings or other relatives also are coming to an end.

The Mordechai family lived in Veria, Greece, near Thessaloniki, where nearly the entire Jewish community was annihilated within a few months, in one of the most brutal executions by the Nazis.

When the Nazis began rounding up the Jews for deportation in early 1943, the family’s non-Jewish friends provided them with fake identity cards and hid them in the attic of the old abandoned Turkish mosque. They were there for almost a year, hearing the screams outside of other Jews being rounded up. But, eventually, they had to leave because their health was declining in the cramped, unventilated attic.

That is when Dina and her two older sisters took the family of seven into their own single-room home on the outskirts of the city, sharing with them their meager food rations. One of the children, a 6-year-old boy named Shmuel, became gravely ill and had to be taken to a hospital, despite the risk of exposing his identity. He died there.

Shortly after that, the family was informed upon, and Dina’s sisters and their relatives helped them flee in various directions.

Yanai, the oldest, headed for the woods; another went to the mountains; and the mother headed out on foot with her youngest two surviving children, in search of another hiding spot. Dina and her orphaned and impoverished sisters provided them with clothing before their departure. The family reunited after liberation and made its way to Israel, where the children built families of their own.

Yossi Mor, today 77, was just an infant when his family was taken in, but he said he could still remember a few things, such as when his older brother died and the kindness they encountered from their rescuers — who gave them various forms of refuge for nearly two years.

“They fed us, they gave us medicine, they gave us the protection, everything, they washed our clothes,” he said, before gesturing toward Dina. “She loved me very much.”

Mor and Yanai had gotten together with Dina in Greece years ago. But the younger generation of their extended family, which included grade-school children in pigtails and soldiers in uniform, had never met her before Sunday’s ceremony. The two soldiers proudly pushed Dina and Yanai throughout the complex in their wheelchairs.

A special committee, chaired by a retired Supreme Court Justice, is responsible for vetting every case of “Righteous Among the Nations,” before awarding the title. Following a lengthy process, between 400 and 500 are typically recognized a year and the process will continue and new stories come to light, even for those awarded posthumously, said Joel Zisenwise, the director of the department at Yad Vashem.

“What we see here is moving in the sense that we have evidence of an ongoing relationship of the rescuers with the survivors and the descendants. It is an ongoing form of paying tribute,” he said. “It definitely is moving to see these families coming together knowing that they may indeed be one of the last meetings.”