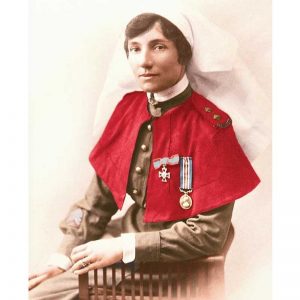 In preparation for my novel “Mabel of the ANZACS” I did a whole lot of research which led me to some very interesting info and people. The diaries of real nurses are incredible to read.

One of the diaries belonged to Sister Alice King.

“On the night of 22 July 1917 the hospital (aka Casualty Clearing Station- think of a WW1 MASH unit) was bombed. Although close to the railway line the hospital had never been attacked before and Ross-King was following an orderly along the duckboards when five bombs hit the hospital, the first falling directly ahead of her. In her diary she describes the horror and carnage that followed and it was for her bravery during the attack that she was awarded the Military Medal.

The citation praised her ‘great coolness and devotion to duty’ during that night. Ross-King was one of only seven nurses of the A.A.N.S. to be awarded the Military Medal during World War I.”

MY NOVEL: MABEL OF THE ANZACS is a standalone novel set in the Eva and Zoe timeframe. The events of this novel take place between Book 2 (Where Shadows Linger) and Book 3 (Hidden Truths). It’s not necessary to read the novels to dive into this one.