Book Review: “In The Blood of the Greeks” by SPR Reviews

Self Publishing Review site has reviewed “In The Blood of the Greeks” on 28 April. 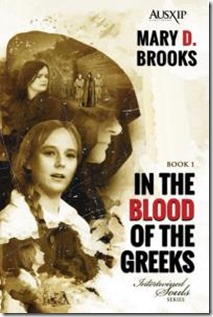 You can purchase the book from Amazon (ebook) and in Print (Amazon, B&N and other bookstores)

In the Blood of the Greeks, Intertwined Souls Series Book 1, by Mary D. Brooks, is an amazing story set against the horrors of World War II.

In Larissa, Greece, the town’s occupants are living in fear. World War II is raging in Europe, but in their small town, they are living under Nazi tyranny. Zoe Lambros, a young Greek woman, has suffered much due to the war. Her hardened heart desires one thing: revenge. Eva Muller, the daughter of a German Major in command of the occupying force, is living with her own fear. When the two women meet, it’s not a friendly encounter. Can they overcome their hatred and work together to survive the war?

There are many novels that take place during World War II. To write one that stands out in the crowd takes not only a great story, but intriguing characters, heart, passion, fear, and unfortunately blood. In the Blood of the Greeks is more than a historical fiction novel. It’s more than a lesbian romance. It’s a classic tale about forbidden love and finding the courage to follow one’s heart no matter the consequences. The pages are filled with courageous people who are everyday people doing what they think is right even if that means they might be killed. War is hell. Not just on the battlefields, but on the home front. Every day is filled with risks, sadness, and despair. But there’s also hope. While you may need Kleenex while reading this story, you’ll also laugh, cheer, and realize that even when everything looks bleak, there is still happiness to be found. It’s a wonderful lesson that all of us can apply in today’s world. Never give up, no matter what the odds, especially if love is involved.

The author does a wonderful job of whisking the reader back in time to occupied Greece and it’s nice to see a novel focus on Greece and not France. So many people lived under Nazi terror and it’s important that stories from all the countries are told. Mary D. Brooks did her research and she’s created such a realistic story that is harrowing. Many may wonder what it was like to live during World War II. Read this book to get a taste. Brooks thrusts the reader into the midst of the occupation in such a way it’s not surprising to find oneself gasping for breath, fearful that death is just on the next page.

Eva and Zoe are incredible characters and their depth keeps the reader engaged in the story. Brooks, though, has such a wonderful supporting cast filled with good guys and truly evil ones. However, not all of them are black and white, and it’s the shades of gray that make this story so realistic and addictive.

Even though this is a romance, it’s also a thrilling read. Who can Eva and Zoe trust? This sense of dread makes for some uncomfortable reading at times, but it also makes the story unforgettable. To become that enthralled by fictional characters is a treat for book lovers. Historical fiction and romance fans will enjoy this heartfelt story. Highly recommended.

Check out the original site