A few weeks ago, I had the opportunity to start reading a new book called “The War Nurses” by Lizzie Page. This was soon after I finished my novel “Mabel of the Anzacs“. It’s also quite funny how Lizzie and I connected. I was looking at pictures of nurses and found two pics (one of them reminded me of a friend and I pointed it out them). Little did I know that the picture was of two nurses Mairi Chisholm and Elsie Knocker that Lizzie wrote a whole novel about! I had to get that book and read it! There are very few books that grab me by the first chapter. The War Nurses did that. I was so impressed, I asked the Lizzie if she wanted to write a guest blog about her books. The War Nurses is a fantastic read (plus Mairi and Elsie ride motorcycles so that is always a plus!). Enough from me. Here’s Lizzie! 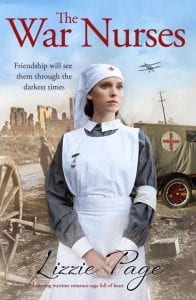 I’m Lizzie Page, the author of ‘The War Nurses’, the first in a World War One trilogy released by Bookouture in April this year. ‘Daughters of War’ will be out on November 12th and I’m currently working on Book three. (It’s going ok, since you asked 😊)

Like Mary D, I’ve long had a fascination with the unsung heroines of World War One, and as MaryD did with Mabel of The Anzacs, I wanted to shine a light on their contributions.  I first read about Elsie and Mairi a few years ago, and one of my first reactions was annoyance that I had never heard of them before. How come I wasn’t told about them at school or in films?  How had their names never come up?! They were such remarkable women. Elsie was an extraordinary motorcyclist – in a time when very few women rode – a mother of one, a trained nurse and a veritable powerhouse. Mairi, ten years younger, was also brilliant with a bike – she raced on dirt tracks – and mechanics.

As soon as war broke out in August 1914, Elsie and Mairi joined a ‘flying ambulance squad’ which went to Belgium to help the war effort.  After just a few weeks, Elsie realised instinctively that the injured needed to be seen as quickly as possible. The quicker they were seen to, the more chance of survival. This is known as ‘The golden hour’. Elsie proposed moving to a ruined cellar house only yards from the front line, where they could live and speedily help wounded soldiers. Young Mairi went along with her.

The British army were not happy with the women being there.  A rule subsequently went out that no women were allowed close to the Western Front – however an exception was made for Elsie and Mairi who by then had pretty much entrenched their emergency medical centre there. The Belgium Government were more cooperative but said the women would have to pay for everything themselves.  Elsie and Mairi did this by sending photographs and stories of themselves back home which were published in the newspapers, (people then sent money, bandages, bibles(!) or towels or whatever was needed) and by going on fundraising tours throughout Britain.  For over three years, the women lived in the dark, tiny cellar house, with limited food and water.  They were under constant threat of attack from shelling, snipers, explosions, and were gassed twice.  Day to day life was very difficult, with rats, lice and goodness knows what, yet they managed to save the lives of hundreds of men.  They received several honours and medals for their tremendous efforts.

I found what the pair did in Belgium fascinating, but what I was really, really interested in was what their relationship was like. I had also read that after the war, they had a falling out and hardly ever spoke to each other again. Ah ha! I thought. How on earth had that happened?  So this is what I explore in ‘The War Nurses’ which is a fictionalised account of Elsie and Mairi’s lives (narrated by Mairi). I like to think of it as ‘a very passionate friendship’ story. It asks how do we react to crisis’ differently and what do we do when we find out we don’t know someone as well as we thought we had?

When I decided to write about Elsie and Mairi, I’m embarrassed to say, I didn’t realise quite how much research would be involved. (As I’ve explained, it was the incredible characters that drew me to the story, not so much the era.) This meant I had a lot to learn about the Great War.  I visited Ypres in Belgium where they were based, – it’s an incredible place – and I went to the Imperial War museums, the Science Museum and to as many talks and plays about the war as I could. And I read a lot of the incredible poetry from that time.

Recently, while writing book two, and after more of my favourite characters dying, I was grumbling about how desperately sad it all was, and MaryD reminded me to ‘look for the light’. That’s very true.  (Thank you, MaryD!) World War One was absolutely horrendous, but it was also a time of immense change or progress for women, when women got fully involved the work-place and it was, of course, a time of great loyalty, sacrifice, bravery, dignity, heightened emotions and dramatic love affairs. I’ve tried to make sure, despite their settings, ‘The War Nurses’ and ‘Daughters of War’ aren’t miserable(!) My editor is also fabulous at steering me back to the bright side. She always lets me know when I go too far with the ‘heart-breaking’ and encourages me to put in something ‘heart-warming’ as well. There are some funny moments too, I promise. Gallows humour is important!

Book two, ‘Daughters of War’ is based loosely on an American poet, writer and war nurse, Mary Borden.  In ‘Daughters of War’, May Turner leaves her family in London to live and work in a field hospital in France, and we see May’s inner conflict about being away and her maternal guilt.  When her husband threatens to do something awful…May is torn between family and duty. How far can we go to find a place we belong?  What does it mean for those left behind?  Unsurprisingly, ‘Daughters of War’ shares several themes with ‘The War Nurses.’  Both are about women being called upon, the struggles they experience and the courage they show.  That’s what I love writing about most after all!

NEWS FLASH: The War Nurses has been selected for a Kindle Australia daily deal on the 12th October with a price drop to $1.49 ANZ – A fab opportunity to get a copy!

You can pre-order Daughters of War here:

Huge thanks to MaryD for letting me chat here! I’d love to hear your thought about the books, women in history, writing, anything you like, so if you’ve got a burning question, feel free to get in touch.