Jewish Photographer Who Captured The Rise of Nazism 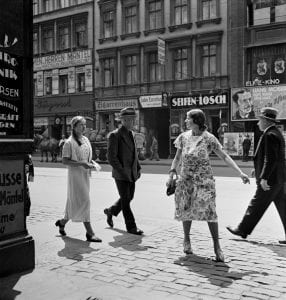 Swastika over the doorway…

Terror in focus: the Jewish photographer who captured the rise of Nazism

Roman Vishniac is famous for his images of Berlin in the 1930s, as swastikas began to creep on to the streets. But did their sacred status overshadow the brilliance of his later work?

In 1920, Roman Vishniac and his new bride Luta arrived in Berlin. Having fled the turmoil of post-revolutionary Moscow, the couple had hastily been married by a station master in a Latvian border town, before traveling to Riga and on to the German capital. There, Vishniac was reunited with his wealthy parents, who had left Russia three years earlier, and he and Luta were married again in a register office before their union was blessed by a traditional Jewish ceremony. So began their new life in a city that an excited Vishniac described as “a living whole … the centre of western Europe”.

Roman Vishniac Rediscovered is at the Photographers’ Gallery and Jewish Museum, London, until 24 November.